I have received the prototype Powerpole Distribution enclosure back from the laser cutters and am very pleased with the results so I’ve sent off a large number of lids to be cut.

I’m hoping the I will receive them back in about a week or so at which point I will add the kit to the store. There will be fully built versions available too for those of you without the tools or time.

I’ve recently received interest in just the bare PCBs which is an interesting idea. I have invested heavily in the PCBs, components, Powerpoles and the laser cut enclosure which I need to clear first. I’ve had to purchase in bulk to make the kits cheap. If once the first batch of kits sell out there is enough interest in bare boards I may get another run of boards produced. The question I have is why you want to go to all the effort of sourcing the parts and cutting your own boxes?

I’ve learnt quite a bit whilst taking the idea and turning it into reality. I also now have contacts to make beautiful PCBs in large quantities and a local(ish) company with laser cutting skills. I’ve even had to learn basic CAD skills to ensure the job got done properly. All of the skills gained will come in handy for the next project for which I am already writing code and collecting components for a prototype. More on that soon. 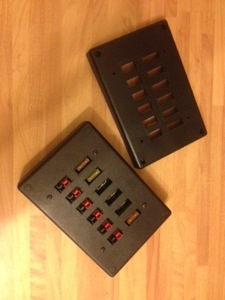